The idea of doubt has more of a fearful color to it. Like indecisiveness, it freezes the traveler at any fork in the road.  There is the doubt that a right decision can be made or the fear of giving up gained ground for new venture.  Doubt, like fear, keeps a traveler stagnate. The Thomas we know of, the "doubting" Thomas, saint, disciple, apostle, was not fearful.


Then Thomas (also known as Didymus) said to the rest of the disciples, “Let us also go, that we may die with him. (John 11:16 NIV)

These were the words of the disciple as he assessed Jesus' decision to return to Judea.  There was great concern about returning to this region due to Jesus having nearly been stoned to death. However, Thomas spoke up and expressed his readiness to follow Jesus and die if it be necessary.

Thomas is popularly known for his doubt when faced with the resurrected Jesus.  This is possibly a mistaken assessment of his character.  Thomas wasn't frozen with indecisiveness.  He was not the unbeliever who walked away and ignored the gospel. On the contrary, Thomas made a decision as to what evidence he needed, how he would obtain such evidence and then carried out the plan.

Pushing his fingers into the recovered wounds of Jesus' nailed hands/wrists, Thomas confirmed the resurrection for himself. 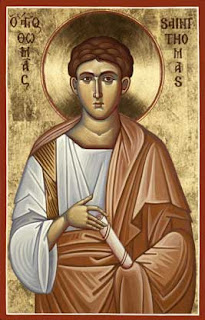